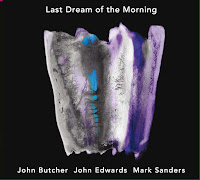 Being an inexperienced listener in the area known as Improv makes me highly qualified to discuss Last Dream Of The Morning. Doesn't it? No? Perhaps, as an expert on Improv, you disagree. But firstly, I wonder, do you actually exist? I believe such people exist but know none personally. David Toop exists. I know this because I have books by him which, despite having read quite a few pages of leave me with little more expertise in the field of Improv than I began with.

Beginnings: improvisation is another matter. I have heard that since...let me think...the late-70s? When that much-maligned thing known as Jazz-Funk became popular. Improv experts will challenge the notion that much improvisation occurred on Jazz-Funk records and it's true to say that the very worst were no more than wine bar Muzak. The best...the best are beyond reach of my memory but probing time a little further back there was Herbie Hancock's Mwandishi band which, as you know, made the best Jazz-Funk ever before it became known in the popular sense as Jazz-Funk in the form of sun strips on cars parked up for Caister week-enders.

Returning to Improv experts (the existence of) and my relative ignorance, can I gain any points by saying I once played with Derek Bailey? Yes, I did. But before you start racking your brain to recall my name occurring on any of his recordings stop, because it didn't. I 'played' the turntables 'live' with him at a Wire magazine event which was eventually included in their '60 Concerts That Shook The World'. Some of you long-term readers will have heard me say that before and I shall dine out on it for as long as I live, probably. Unlike Wire magazine readers, I know where to find Improv experts, or fans, at least. At gigs. Obviously. I have pondered in the past hanging around newsagents until I catch someone buying the latest copy of Wire, or 'The Wire', as it was once officially named. I know Wire-buyers exist because I've noticed a reduction in copies on the shelf of my local newsagent. That and the fact that it still exists.

That Improv still exists is testimony, not to its popularity (stupid!), but the stubborn persistence of men and women (he says, in order to be PC without ever having seen a woman playing at an Improv gig which, I know, does not mean they never do, more that a: they are rare, b: I haven't attended that many Improv gigs...not since the early-80s, when I saw Lol Coxhill, Evan Parker et al play upstairs rooms in pubs) wishing to get together and Improv together. I mean 'improvise'. I've no time right now to explain Improv to you if you're wondering what it is and whether it's like Jazz. Suffice to say it's like Jazz, but without the tunes, therefore not improvisation derived from melodic structure, harmony, chords and whatever else makes up music as you know it. No. Just...plucking, strumming, blowing, banging etc...often on instruments associated with Jazz. If you want to no more, don't read my book.

I hadn't listened to Improv for a while until Last Dream Of The Morning dropped into my inbox. I confess I was quite prepared to be unimpressed by what I would hear, not because I doubted the pedigree of Improv stalwarts John Butcher (saxophones), John Edwards (double bass) and Mark Sanders (drums), but because I imagined being bored. I can be very stupid sometimes. Just like you. We're human after all and as such, prone to prejudicial preconceptions. Someone once accused me of being middle-class because I listen to Jazz and Classical music! But I've no time right now to discuss class in relation to cultural preferences.

I barely have time to discuss this album. I have a piece of art to finish and have talked long enough to forget what I was going to do next with it. Mostly, like Butcher/Edwards/Sanders, I improvise. My, how they improvise. It must come from years of Zen-like 'non-thought' as they intersect through sound. Listening for the third time and right now to the second half of Gridlocks, I marvel at the other-worldly phantom breath of Butcher in the lull before it builds again, along with Sanders' cymbal-swish and Edwards' bowed bass. The spaces, or feeling of space, in Syphon...Edwards' fluttering bass...the delicacy...lightness of touch...is astounding, as is the whole album. Listen without prejudice (not wishing to assume you would) and you will agree. I would say more but writing about Improv is even more difficult/futile than dancing to architecture.

Out now on Relative Pitch Records